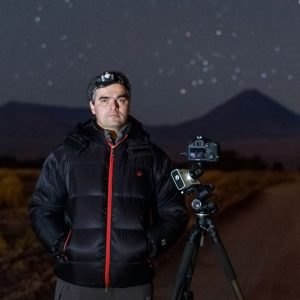 Born in Belarus, Yuri now lives in Chile, where he works as an astronomer at Carnegie Las Campanas Observatory located in the South of Atacama desert.

During his spare time, he sets up a DSLR camera on a tripod and take images of the night sky, wide-field panoramas of the Milky Way, and other natural phenomena. Yuri has been an enthusiastic stargazer since childhood. With the rapid development of digital imaging technology, he discovered a passion for astrophotography, and nightscape photography in particular.

His images have scored 45 NASA APODs, were featured in Time Magazine, National Geographic, Astronomy, Sky & Telescope magazines, popular websites and on CNN, EuroNews, NHK, BBC and other TV stations. He continually shares his passions for astronomy and astrophotography with people around the world.

Yuri is a member of TWAN and his images can be found on his popular Instagram and Facebook pages.